Asen Stoyanchev
Owner | Content Writer at Maximum Tech
Asen is a Microsoft Certified Professional turned blogger with 10+ experience working in the IT industry as a hardware and software support engineer.

What is a sys fan vs CPU fan? A system fan sits inside the computer case and regulates airflow. A CPU fan cools the CPU directly, as it produces a lot of excess heat and needs its own cooling arrangement.

A CPU fan is adjacent to or directly over a CPU because it needs to blow away the hot air efficiently and quickly.

System fans are near either end of a computer case, and a pattern of holes typically marks their location.

In this guide, we’ll be exploring the differences between sys fans and CPU fans.

What Is The Difference Between System Fan and CPU Fan?

The CPU fan and the system fan have one key difference.

The system fan serves as a chassis fan, which cools the computer case. The CPU fan cools the CPU exclusively.

What Is A Header On A Motherboard?

What Is A Fan Header?

A fan header is a 3-pin or 4-pin connector that attaches a fan to the motherboard or heatsink and ensures power gets supplied to it.

How Is A CPU Fan Header Different From A System Fan Header?

How Many System Fan Headers Can A Motherboard Have?

The motherboard in a computer can have several system fan headers. Some will have two, and others will have three or more.

Can You Run 2 Or More Fans From A Single Header?

Yes, you can. The amperage of most fans is low enough to enable a sufficient power supply even when using a single header.

Can PC Case Fans Be Plugged Into A Power Fan Header?

This is possible, but the power fan header won’t provide any speed control. In our experience, we’ve seen fans running at 100% capacity and not adjusting according to temperature and workload.

What Is A Sys Fan?

Sys fans are responsible for moving air in and out of the computer case, which promotes optimal airflow. They’re also known as case fans to differentiate them from CPU fans.

Intake fans draw cool air into your computer case and are at the front or base of the case. Exhaust fans expel hot air from the case.

What Does Sys Fan Mean?

A sys fan gets defined by comparing it to a CPU cooling fan. It’s called a sys fan because it regulates airflow through the computer case, vital for system performance.

This can refer to both hot and cold air, based on the type of fan, as discussed in our answer to the previous question.

What Is A CPU Fan?

A CPU fan regulates the temperature of the CPU, which creates large amounts of heat due to being the central processing unit of the computer.

Without a CPU cooler such as a fan, your computer would fail within a very short time because it would overheat.

What Is A Sys Fan Vs CPU Fan?

When comparing fan types, the easiest way to tell the difference is to look at their location. A sys fan is often known as a case fan because it’s attached to the computer case wall. A CPU fan serves as a CPU cooler and gets placed next to the heatsink.

Another way to tell the difference is to see whether the fan is an intake or exhaust fan.

How Is Sys Fan Different From CPU Fan?

The sys fan and CPU fan differ by header, location, and type, which we’ve explored in our answers to previous questions.

Once you’ve examined several computer systems, you’ll be able to tell the differences visually. They connect to different sockets and receive signals from the motherboard or the CPU, respectively.

A CPU fan expels heat that radiates from the CPU heatsink. It will often get mounted on top of the heatsink, and this is how you can identify a CPU fan from appearances alone. 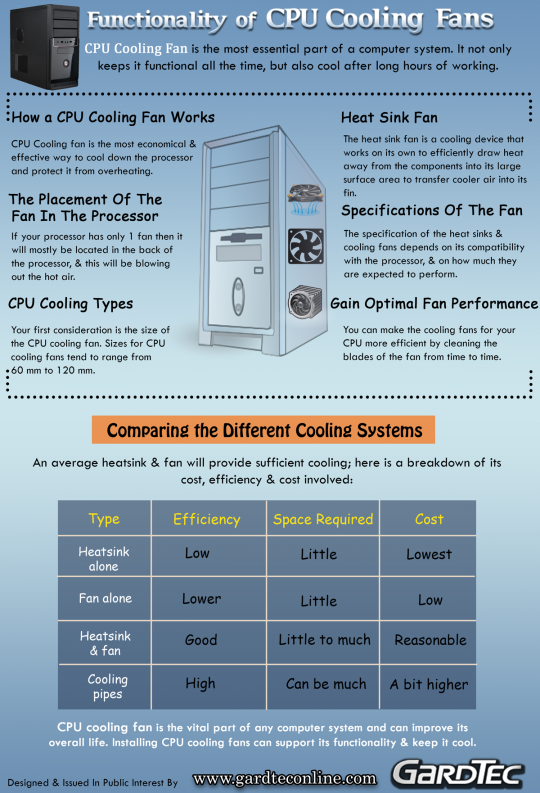 They’ll also have harnesses to hold them in place.

It will depend on your computer system. If it has a processor requiring considerable power, like one inside a gaming PC, you’ll need a sys fan.

Yes, it is in most cases. Your computer will overheat without a CPU cooler, or the central processing unit will fail. That’s why CPU cooling is vital.

But if your system operates on very low power, a heatsink may be able to do the job without the aid of a fan.

When Should I Upgrade My CPU Fans?

CPU fans are worth upgrading when your computer system keeps overheating.

As long as they get plugged into the CPU, there should be no issues with overheating unless the fan is wearing out.

If this is the case, you’ll notice a decline in CPU cooling efficiency and quicker overheating.

Can You Use A CPU Fan As A Case Fan?

Yes, you can use a CPU fan as a case fan if you need to. But I recommend ensuring you have a replacement fan to cool the CPU.

Assuming you do, you can connect the CPU fan to a system fan header on the motherboard and secure it against the computer case wall.

Which Fan Is The CPU Fan?

The CPU fan gets identified by seeing if it’s connected to the CPU fan header on the motherboard and whether it’s adjacent to the CPU heatsink. This shows it’s a part of the CPU cooling system.

When Should I Upgrade My Sys Fans?

This is because as long as you clean out dust from the case fans regularly, they’ll need little to no maintenance, and you can leave them alone.

Dust is important to remove because it can affect fan speed and cooling efficiency. We found an educational video focusing on computer case airflow, which you can watch below:

Can You Use Sys Fan For CPU Fan?

You can use a sys fan as the CPU fan, but you’ll notice that the two fans differ because sys fans are larger. This is an advantage from a heat reduction perspective, as it will keep the CPU cooler.

Can You Connect Case Fans To CPU Fan Header?

As we mention in our answer to a similar question below, yes you can.

You can use a Y splitter to make the connection, and it’s ideal if you lack cooling capacity or don’t have enough system headers.

Is It Possible To Connect The Sys Fan With The Header Of A CPU Fan?

Yes, it is. You can use a Y-splitter to separate the CPU fan header and plug the sys fan and CPU fan into that same header.

I don’t think this is an ideal arrangement, but if it’s necessary, then it can be done to ensure your computer receives sufficient cooling.

What Are The Differences Between Sys Fan Sockets And CPU Fan And Pump Fan Sockets?

This is a technical question I’ve come across occasionally. These sockets relate to how the motherboard deals with fan headers.

What Is A Pump Fan?

If the cooling system within your computer uses water to keep the CPU and other parts cool, then it will have a pump fan.

This fan will pump water through small pipes within the case. This keeps your system cool under a heavy load without using air.

Can I Plug A System Fan Into A CPU Slot?

It’s possible to do this safely, yes. Most fans are compatible with most fan headers. But in our experience, you’ll need some technical expertise to adjust the fan curves in the BIOS.

What Is The Difference Between A Case Fan And A CPU Fan?

How Many Case Or System Fans Do I Need?

It depends on the budget you have, the functions you’ll use the computer for, and the size of the computer. If you’re running a high-end GPU, for example, you’ll need more system fans. In my view, the best experience gets provided by high speed and low noise fans.

Do I Need Both Sys Fans And CPU Fans?

Yes, in most cases, you will require both. Even when the power and speed of your PC components aren’t extreme, cooling is still a necessity.

Is A Sys Fan Crucial To A Computer If You Already Have A CPU Fan?

When looking at a sys fan vs CPU fan, you may wonder if you need a sys fan when you have a CPU fan. If your other components run within safe temperature margins, you can do without a sys fan.

Is It Possible For A Computer To Function With No Sys Fan?

As we covered in the above question, you can run a computer system without a sys fan, so long as it’s safe to do so.

What Number Of Sys Fan Headers Can Be Secured To A Motherboard?

Generally, the number is 2-3, but it can be more depending on the specific computer setup that you have.

Is It Possible For One Header To Allow The Running Of Multiple Fans?

As we mentioned in the main article, you can attach multiple fans to a single header without too much difficulty. So yes, it’s possible to run more than one fan from one header.

"Never trust a computer you can’t throw out a window.”

We may receive commissions when you click our links and make purchases. This is at no extra cost for you. We only promote products that we have thoroughly investigated and believe provide real value to you.

We use cookies on our website to give you the most relevant experience by remembering your preferences and repeat visits. By clicking “Accept”, you consent to the use of ALL the cookies.
Do not sell my personal information.
Cookie SettingsAccept
Manage consent

This website uses cookies to improve your experience while you navigate through the website. Out of these, the cookies that are categorized as necessary are stored on your browser as they are essential for the working of basic functionalities of the website. We also use third-party cookies that help us analyze and understand how you use this website. These cookies will be stored in your browser only with your consent. You also have the option to opt-out of these cookies. But opting out of some of these cookies may affect your browsing experience.
Necessary Always Enabled
Necessary cookies are absolutely essential for the website to function properly. These cookies ensure basic functionalities and security features of the website, anonymously.
Functional
Functional cookies help to perform certain functionalities like sharing the content of the website on social media platforms, collect feedbacks, and other third-party features.
Performance
Performance cookies are used to understand and analyze the key performance indexes of the website which helps in delivering a better user experience for the visitors.
Analytics
Analytical cookies are used to understand how visitors interact with the website. These cookies help provide information on metrics the number of visitors, bounce rate, traffic source, etc.
Advertisement
Advertisement cookies are used to provide visitors with relevant ads and marketing campaigns. These cookies track visitors across websites and collect information to provide customized ads.
Others
Other uncategorized cookies are those that are being analyzed and have not been classified into a category as yet.
SAVE & ACCEPT